Table of contents
Chapter 1: The mission given to Peter and the brothers James and John.
Chapter 2: The Apostle John, who was shown supernatural phenomena in the heavenly realm.
(1) The four living creatures.
(2) Six Wings.
(3) The Seven Seals.
Chapter 3: The Two Witnesses.
(1) Forty-two months’ code.
(2) Unraveling the code of the three and a half days.

Chapter 1: The mission given to Peter and the brothers James and John.

The original author of Apocalypse is the only God, and Michael the Archangel Chief and Gabriel the Angel Chief took on that task. The apostle John was entrusted with the writing of the Apocalypse. As it is written in Matthew 17:1, Jesus took with him Peter and the brothers James and John up to a high mountain, where he gave each of the three men a special mission.

Before I explain to you what the “three missions” are, there’s something you need to know. It is the mission given to Jesus. What was the purpose of Jesus’ descent? It was to unify the religions of Europe with a new monotheism, to eliminate religious strife with each other, and to further The purpose is to facilitate communication with each other. In other words, it is to lay the groundwork for the future establishment of the Europe and America and the EU.

There are two things that need to be done to achieve this. One is to destroy the old monotheistic religion, Judaism, and the other is to destroy the ancient religion of polytheism. In other words, the mission entrusted to Jesus was the evolution of religion, that is, the change of government of religion. That is why the two crosses were needed. The cross is not the tombstone of Jesus. 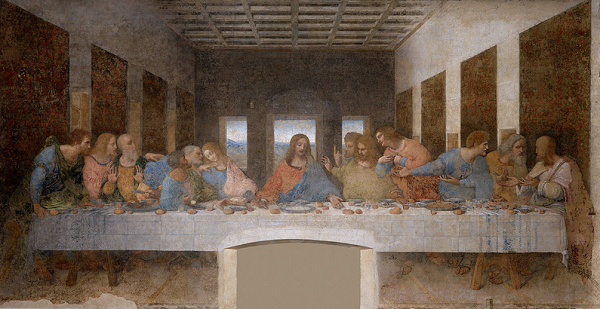 Decrypt the message of the apocalypse hidden in Leonardo da Vinci’s The Last Supper.

Chapter 2: The Apostle John, who was shown supernatural phenomena in the heavenly realm. 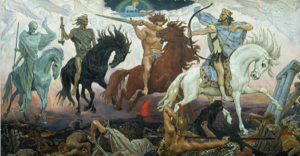 The mission given to the Apostle John was to write the book of Revelation. He was detained in Patmos for the crime of spreading the teachings of Jesus. Patmos is a rocky, barren land. The situation in Patmos, where there are few people, is similar to the high mountains, where many people do not pass. Here, John was caught up to heaven.

That this supernatural phenomenon was real is attested to by Paul. He writes in Chapter 12 Section 1 of 2 Corinthians as follows. “I know a man in Christ who fourteen years ago was caught up the third heaven. Whether it was in the body or out of the body I do not know, but God knows.”

Paul wrote this letter in 54 years when he was in Macedonia. Thus, fourteen years before that, if we calculate by the method used at that time, John was caught up to the third heaven in 41 years. 41 years is the year of “change of government”, when the third Emperor Caligula was killed by the Guard and the fourth Emperor Claudius was born.

You can’t decipher the book of Revelation, if you don’t understand the key word: regime change. You can’t decipher the significance of the two crosses or the when the Apostle John died. More to the point, Gaius Suetonius writes in De vita Caesarum. “Titus Flavius Vespasianus passed away two years, two months and twenty days after succeeding his father, Vespasian.” This implied statement should not read lightly either. 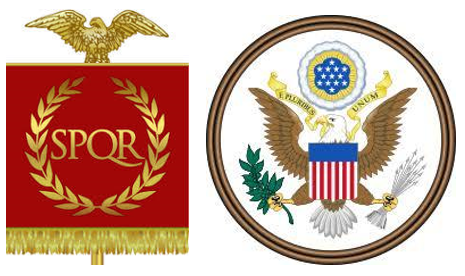 The four  living creatures had six wings. The eagle in the book of Revelation means Zeus. Zeus was enthroned in the Great Temple of Jupiter in the capital, Rome, as a state god. The eagle is the state, and the wings that carry the eagle signify the emperor who running the State. The Roman emperor was regarded as an incarnation of Zeus in the administration of the rituals.

The book of Revelation divides human history by 2000 years. The first 2000 years period begin in 4000 B.C., when Mesopotamia was divided between Sumer and Akkadian rule. The two ethnic groups died out at the same time in 2000 BC. In their place, the Amorite, whose birthplace was the Iranian plateau ruled Mesopotamia. 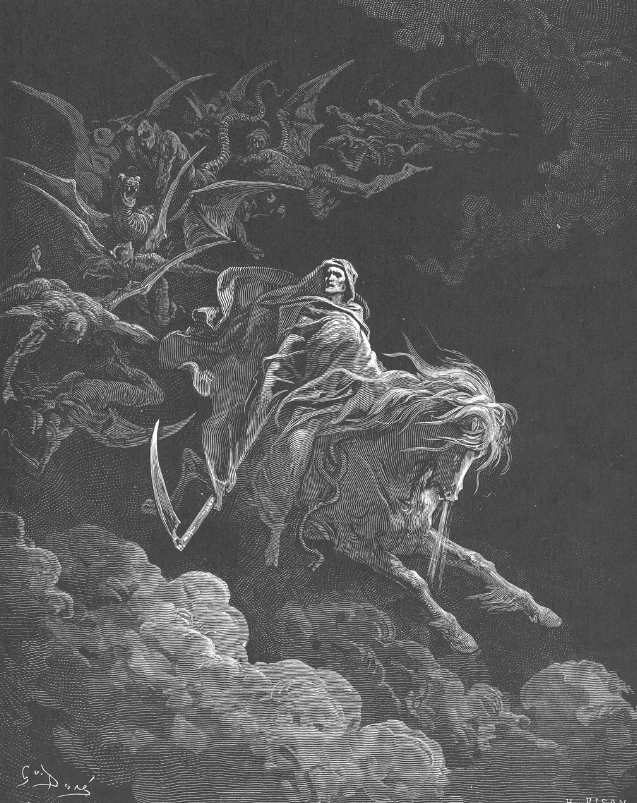 The seven seals are “an inventory of those who are to perish,” but just as the seven kings were described as six wings, in the world of Apocalypse, “seven = six.” Thus, “The seven seals” are properly “The six seals.” Those who tell us that “seven is a holy number” or “seven deadly sins” are blaspheming the Bible. They must be prepared being exiled into “outside the holy capital called hell.”

I saw that the Lamb opened one of the seven seals, and I heard one of the four living creatures saying, as with a voice of thunder, “Come and see!” And behold, a white horse, and he who sat on it had a bow. A crown was given to him, and he came forth conquering, and to conquer (Revelation 6:1).

Thunder is the power of Zeus, the Roman god of the state. The rider of the white horse was called by Zeus “come!” It means that he is not the servants of God, but the person of the Roman Empire. In other words, those who ride the four horses are not holy men.

As a testimony to this, the book of Revelation describes the Holy One riding a white horse in chapter 19, verse 11. ” I saw the heaven opened, and behold, a white horse, and he who sat on it is called Faithful and True. In righteousness he judges and makes war. The armies which are in heaven followed him on white horses, clothed in white, pure, fine linen. 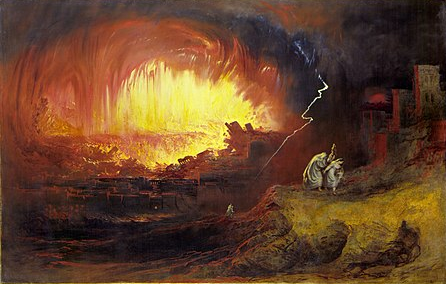 “A reed like a rod was given to me. Someone said, “Rise, and measure God’s temple, and the altar, and those who worship in it. Leave out the court which is outside of the temple, and don’t measure it, for it has been given to the nations. They will tread the holy city under foot for forty-two months” (Revelation 11:1).

The number of people who fell into the demon world where was told “the outside of the temple” and the number of non-Christians who are Gentiles do not measure it, because it is not worthy to be measured. The numbers in the book of Revelation became only a shape by this rule.

“They will tread the holy city under foot for forty-two months. I will give power to my two witnesses, and they will prophesy one thousand two hundred sixty days, clothed in sackcloth” (Revelation 11:2).  Who are the “they” that The Revelation tells us? This  the sentence of apocalypse has a “twofold artifice” in it.

Only Paul Gustave Doré was able to portray the cross of Jesus correctly. 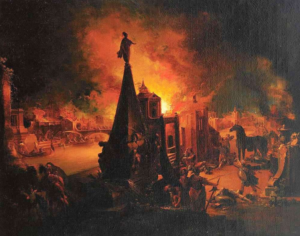 The Fall of Troy involving “The Two Witnesses.” Will you be able to solve this mystery?

(2) Unraveling the code of the three and a half days. 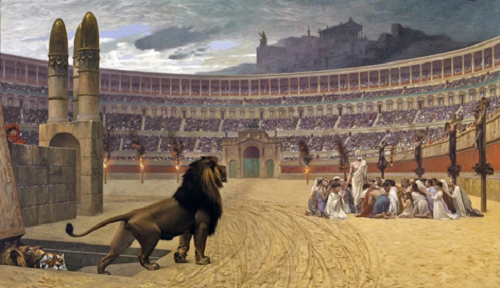 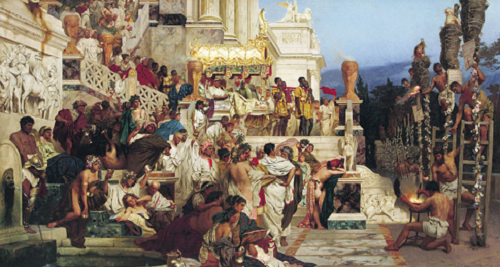 “The code of the three and a half days” has already been explained. Jesus died at three o’clock in the afternoon, which is just a staging of the sentence of Apocalypse to coincide with the burial of the sacrificial lamb at the Passover.

The book of Revelation tells us, “With this code, look at the cross of Jesus superimposed on that of Peter. In other words, who killed Jesus? It tells us that the murderer is same people who killed Peter and Paul.

For Pilatus, the imperial representative sent by the Roman Empire to represent the emperor, God sent an angel to his wife’s dream. If he even an agent, he was involved in the murder of Jesus, the prophecy (scenario) of the Apocalypse will collapse.

The book of Revelation says that “The murder of the two witnesses was planned by Roman priests who wanted to prevent the spread of the Christian faith.” However, the Roman people were not, like the Jewish people, were danced by the priests’ plan. This is the difference between the Roman people, who were governed by loosely binding religion of polytheism, and the Jewish people, who followed the teachings of strict monotheism.

“Thumbs Pointed Down” by Jean-Léon Gérôme.